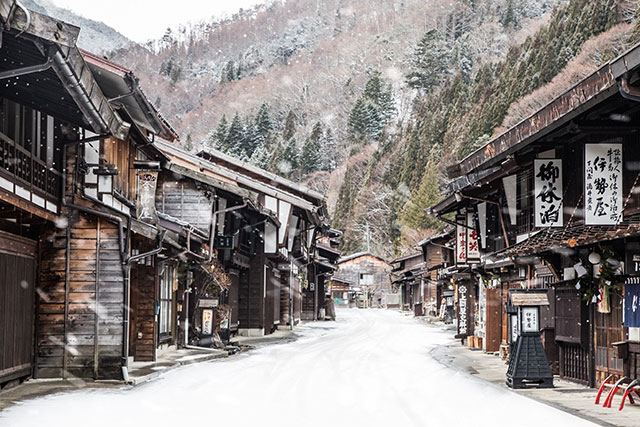 Winter Explorations through the Kiso Valley

The Kiso Valley which runs almost vertically south (or north, depending which way you traverse it) through the southern part of Nagano is an ancient trade route that served as an important means of commerce in the area since before the Edo period.
The route became saw a sharp increase in usage during the Edo period, when it formed part of the Nakasendo – a 500km road that connected the cities of Kyoto and Edo (modern day Tokyo). Warriors and tradesmen would often make the arduous journey along the Nakasendo to the capital city by foot, stopping at “post-towns” that served as a place for travelers to rest their weary feet and stock up on food for the long journey ahead.

Along the Kiso Valley, a few of these post-towns have been meticulously preserved to look like they did during the Edo period, when they served hordes of travelers navigating the Nakasendo. Of particular note are the towns of Magome, Tsumago and Narai (in order of popularity).

Visiting today allows you to experience traditional Japanese buildings from a bygone era and feel an atmosphere of old Japan that is hard to come by in most other areas.
Many of the buildings still serve as guesthouses, while others have been preserved as museums showing how life was during the Edo period. There are plenty of places to stay along the Kiso Valley, allowing you to explore the old towns at your own pace.