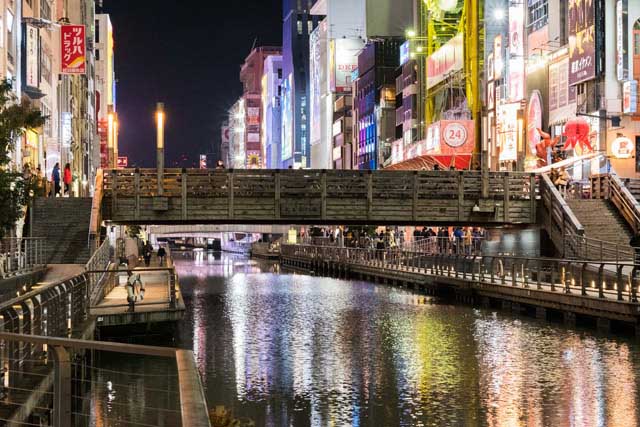 Osaka Best Things to Do

Osaka is part of the Keihanshin metropolitan area, the second largest in Japan and in the world, with about 19 million citizens, making it an important economical and cultural hub. This also makes it a common stop on the list for most foreign visitors coming to Japan. For a long time, Osaka has been a city of merchants, meaning that it also has been a melting pot of people from all parts of Japan and abroad. This in turn, means that it has a refined culinary culture, gaining the city it’s nickname of Tenka no Daidokoro, or “nation’s kitchen”. Today, Osaka is strongly associated with several kinds of foods, such as okonomiyaki, takoyaki and Ramen. It’s vicinity to Kobe also means that there are plenty of restaurants in Osaka specializing in high quality Wagyu meat. The people of Osaka are known for their warmth and friendliness. Compared to the Japanese capital, people in Osaka tend to be much more approachable and contact seeking. We almost dare to guarantee that a night out will result in an increase of your number of Facebook friends. Particularly the neighbourhoods of Nanba and Tsuruhashi has a large number of tourist friendly drinking joints. If you are more into culture and temples rather than late night drinking, Osaka has got you covered too. There are many impressive temples and shrines scattered around the city, with the Sumiyoshi Taisha just south of the city centre being not just one of the oldest shrines in Japan but also one of the most beautiful. There’s also the centrally located Shitennoji temple, as well as Hozenji temple with its moss covered statue located a stone's throw from the bustling shopping streets of Namba.